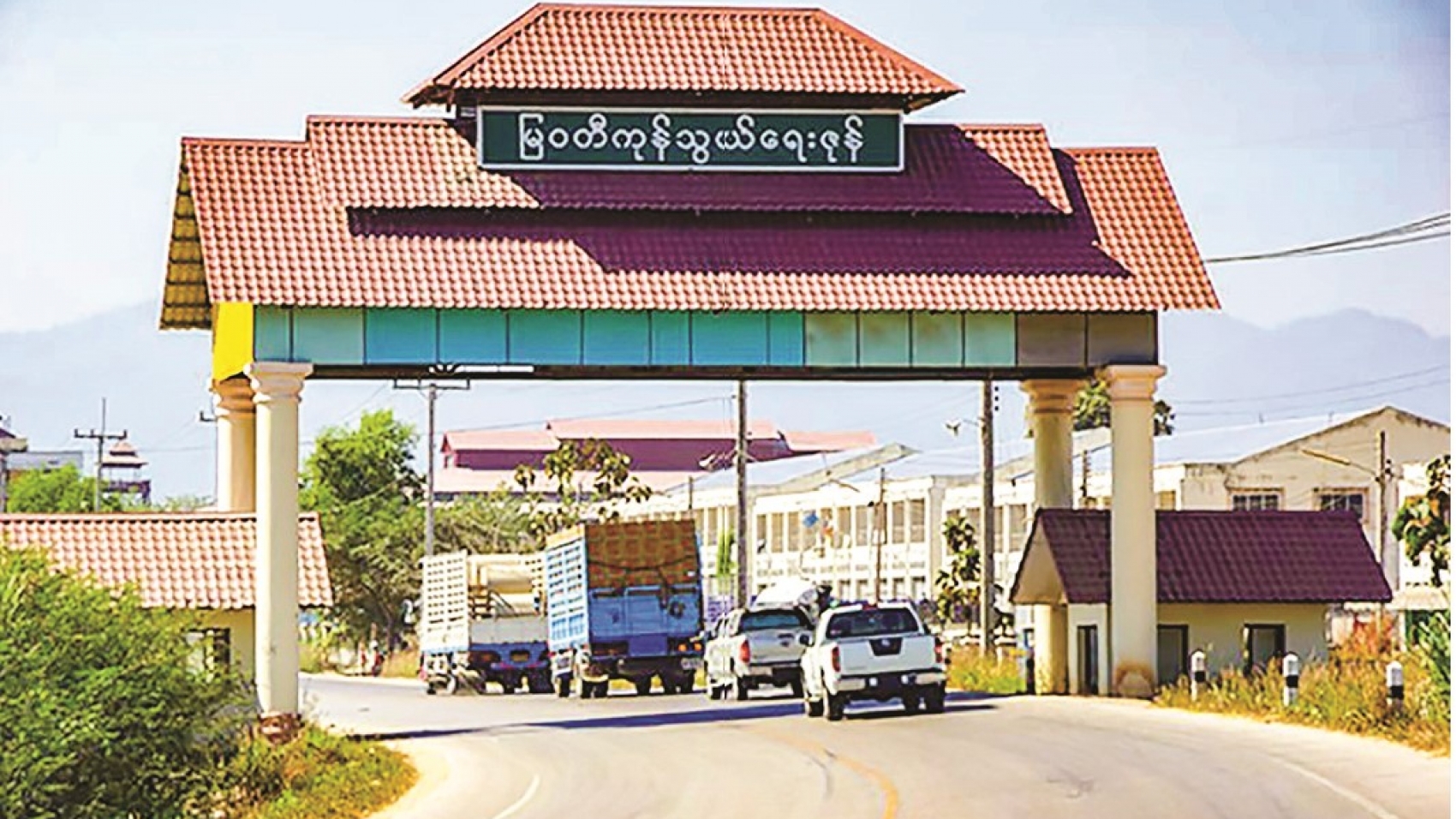 MYANMAR’S trade with foreign countries through land borders reached over US$4.84 billion as of 5 March in the current financial year (FY) 2020-2021, which started on 1 October, according to the figures released by the Ministry of Commerce. From 1 October to 5 March of 2020-2021FY, the total border trade value amounted to $4.836 billion, a decrease of $86 million compared with that of the same period last FY when it amounted to $4.92 billion.

The country’s export via land borders amounted to $3.12 billion while its import shared $1.72 billion during the period. Muse topped the list of border checkpoints with the highest trade value of $2.28 billion, followed by Myawady with $549 million. The country conducts border trade with neighbouring China through Muse, Lweje, Kampaiti, Chinshwehaw and Kengtung with Thailand via Tachilek, Myawady, Kawthoung, Myeik, Hteekhee, Mawtaung and Maese crossings, with Bangladesh via Sittway and Maungtaw and with India through Tamu and Reed border posts, respectively.

From 1 October 2020 to 5 March of this FY, the country’s foreign trade totalled over $4.84 billion, while its sea trade valued $8.71 billion, according to the ministry. Myanmar mainly exports agricultural products, animal products, marine products, minerals, forest products, manufactured goods and others while capital goods, intermediate goods and consumer goods are imported to the country. 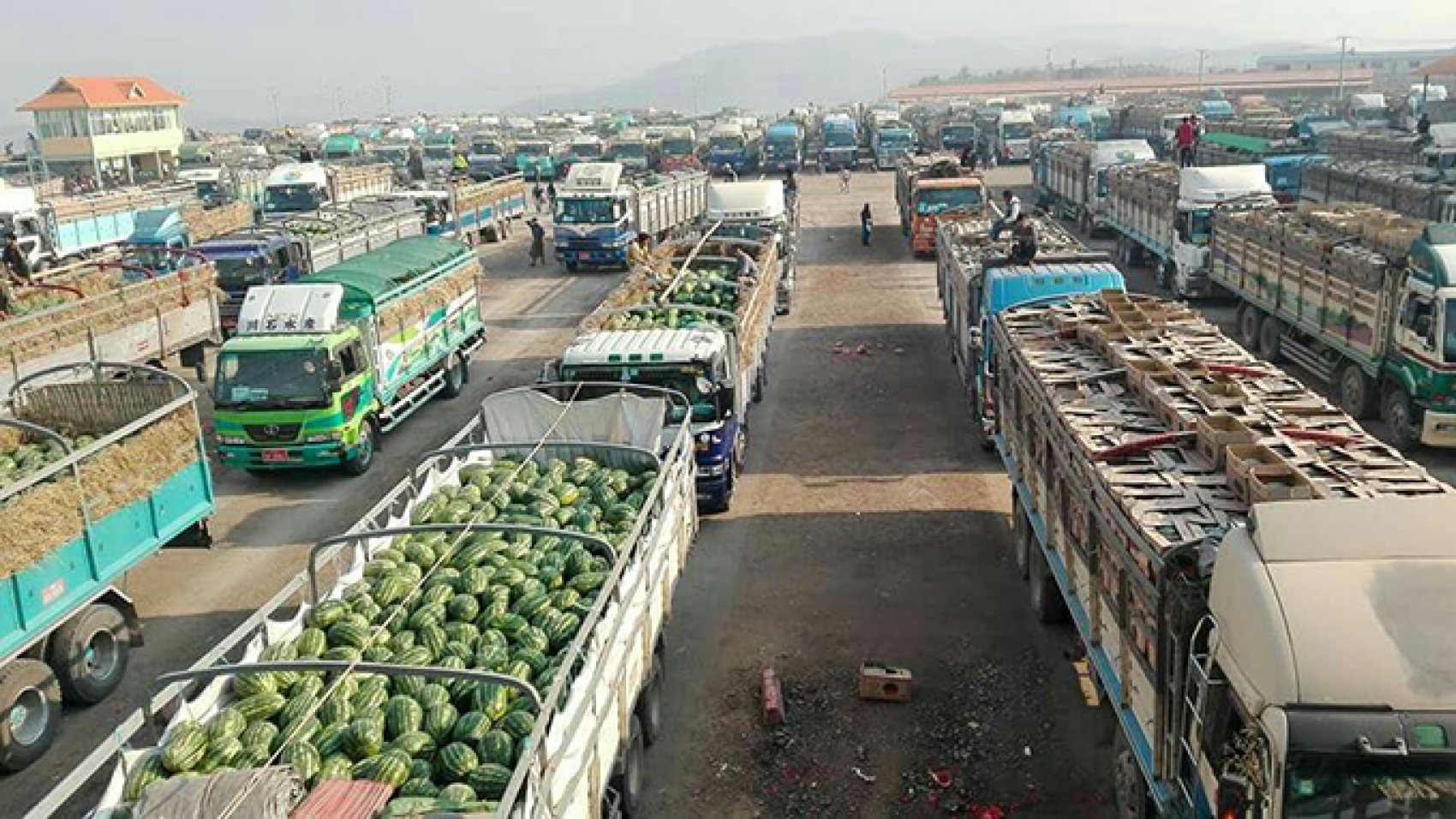 ABOUT 1,300 trucks of watermelon are now stranded in the Muse 105th-mile zone, and 700 trucks pass the cross-border route between Myanmar and China. Consequently, watermelon supply exceeds the demand, leading to possible market failure, Khwar Nyo Fruit Depot warns. About 250 trucks of watermelon daily enter the Kyinsankyawt checkpoint. In comparison, about 100 trucks loaded muskmelon are flowing into Pan Hseng and Wan Ding every day. There is no market equilibrium. Furthermore, a transport delay affects the quality of the fruits.

As a result of this, the traders are encouraged to keep market balance and maintain the quality, Khwar Nyo Fruit Depot stated. China shut down the post on 25 and 28 February without a specific reason, resulting in 1,300 watermelon trucks stranded in the 105th-mile zone. A truckload of watermelon (855 variety) fetches 45,000-65,000 Yuan at present. Myanmar’s watermelon market earlier relied only on China. Myanmar shipped 45 tonnes of seedless watermelon to the Dubai market in December 2020 and January 2021.

After the country achieves success in the Dubai market, Myanmar plans to expand its market to Hong Kong SAR, UAE, and Qatar. On 5 January 2021, 105th mile Fruit Wholesale Centre released a statement that the number of watermelon and muskmelon trucks for exports is to be set to govern the market. During the previous financial year, the growers and the traders suffered the loss due to the price instability and transportation difficulties triggered by the COVID-19. Watermelon and muskmelon will be harvested up to Mayend across the country, except Kayah and Chin states. Myanmar yearly exports over 800,000 tonnes of watermelon and about 150,000 tonnes of muskmelons to China, the association stated.